The Luttrell Psalter is one of the most famous medieval manuscripts because of its rich illustrations of everyday life in the 14th century. It was made in the diocese of Lincoln for Sir Geoffrey Luttrell (1276 - 1345) of Irnham, probably sometime between 1325 and 1335. I chose to base the scroll on this Psalter, as the images in the book immediately sparked my imagination. I had looked through almost a dozen facsimiles to determine the style I wanted to use, but none could measure of to the fantastical creatures and bold look.
The commission was given to me in July, a Boga Hirth for Lord Truetvin Inglefinger from the Canton of Loche Smythe. My research on the recipient turned up very little however. I was only able to find his group and registered device. I had hoped to make the scroll more personalized, but had to make due with what I had. I went mostly for the archery component, as that was the theme of the award. I did manage to incorporate his device on the right side of the scroll, as a minor glitch I didn’t pay attention to my color scheming very well and realized too late that both his device and the vine sustaining it were supposed to be bright red. I had already painted the base coats of blue and red on the rest of the scroll, so I settled on making the shield in a darker red. I wasn’t impressed with it, but it was the best I could do under the circumstances.
I spent nearly a week analyzing the facsimile, looking for details in the calligraphy, grotesques, color scheme, shading techniques, and page layout.  Once I was comfortable with how the format should look, I started working on the Calligraphy. It took me nearly two weeks just to learn the hand; my normal penmanship is rather spidery, as opposed to the compact repetitive nature of the Gothic script. (Figure 1). I was adamant about using the Gothic script, as it was one of the characteristic features of the Psalter.

Above: Calligraphy from the Psalter.
Below: Sample of my first attempt at Gothic 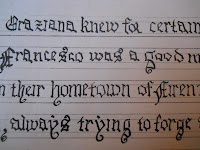 To help learn the Gothic Script, I utilized the handout that Lady Elynor of Glastonbury gave out during class ‘Calligrpahy for Illuminators’ at Lillies to get the pen stroke directions. For the spacing, I drew red lines down the minims of a sample font form the facsimile (Figure 2). 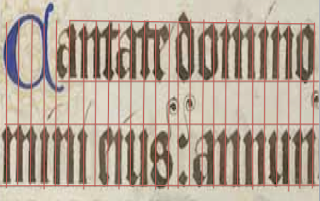 Once I was confident in my ability to do the hand properly I put quill to parchment. I made sure to do the calligraphy in one sitting so the font would look similar,  it has been shown that a persons handwriting changes from day to day, based on their mood, energy level, and environmental factors. I used Strathmore Series 300 Vellum Bristol Board size 11”x14” as it was handy and in my price range to work with. The facsimile itself was done on vellum, which is not in my current skill range to work with.
After I copied the calligraphy to the Bristol board, I realized that I was not as fond of the layout as I had thought. My original intention was to do a portrait layout with all the text in one column, as was done in the Psalter (Figure 3). However, after looking at it more, the font seemed to small to be easily read, and it looked cramped. After some quick drafting on copy paper, I decided to make the scroll landscape, I put the main body of the text in two colums, with the introduction and the conclusion stretching across the page (Figure 4).
I let the ink dry for several days before beginning the illumation. Some of the ink smeared at the top before it dried completely, initially I freaked out, I had spent so much time on this to start over. I scraped off as much ink as I could and burnished it with a spoon. I only had to slightly alter my initial sketch to cover the stains. I covered the calligraphy with tracing paper to protect it from hand oils and smearing. I spent two days painting, allowing the base coats to dry before adding the whitework. 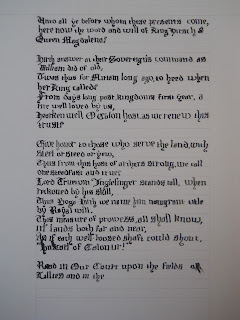 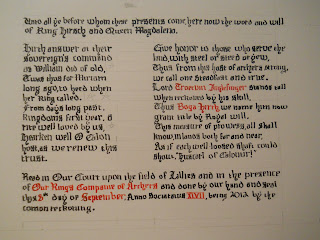 Historically, the makers of the Psalter would have used sable hair brushes, paint made from natural pigments, and vellum. I did not have access to these items at the time I made the scroll, instead I substituted natural pigments for Reeves Designer Gouache, Windsor & Newton watercolor brushes sizes 000 and 0, and Strathmore Series 300 Vellum Bristol Board size 11”x14”. To draw the design for the illumination, I used a #2 pencil and 05 black micron pen. I also used Bombay black India ink and Higgins Red ink.
In doing this scroll I learned a lot about time management and the importance of research. Learning the script took longer than anticipated which pushed back all of my other self-set deadlines. The difference between painting AoA’s and original GoA’s was something I wasn’t initially prepared for. My technique and skill level dropped significantly on this scroll than what I had come to expect from myself on my previous AoA work.

On the next original work I do, I will be sure to make several design sketches, rather than just making one and running with it. I will work to do more detailed work, which first requires planning for such opportunities. In the design I made this time, there was no place to put fine details without it looking to busy. The process of making an original GoA made me realize that I am not as experienced as I thought. I realize that I have a long way to go still but I can’t wait to continue learning.
Overall, I enjoyed the process of making and researching the scroll and found it very rewarding. I learned a lot about myself as a scribe and as a professional. I only hope that the recipient enjoyed my work as much as I did.
Posted by Lady Nadezhda Mikolaeovika at 3:56 PM No comments:

Lady Nadezhda Mikolaeovika
A child of the cold lands of NorthShield, upon my coming of age ceremony (a.ka. Graduation) I traversed to the nearby kingdom of Calontir, where I learned the marvels of Illumination and the allure of a SCAdian family. In my short time here I have become addicted to the arts of the Scrivener: illumination, calligraphy, bookbinding, etc.

I have started this blog to keep track of my own progress and share my knowledge with others.

For the basics, my persona is a young girl from Novgorod Russia. My mother worked in a flower shop and my father ran a tailoring studio. I spent much of my childhood at the convent, learning my letters and putting my gift of painting to use on the illuminated books of our time. On my pilgrimage to the western lands, I became friends with a Spanish seamstress who took me in as an adoptive sister.